Published by On The Pulse Consultancy 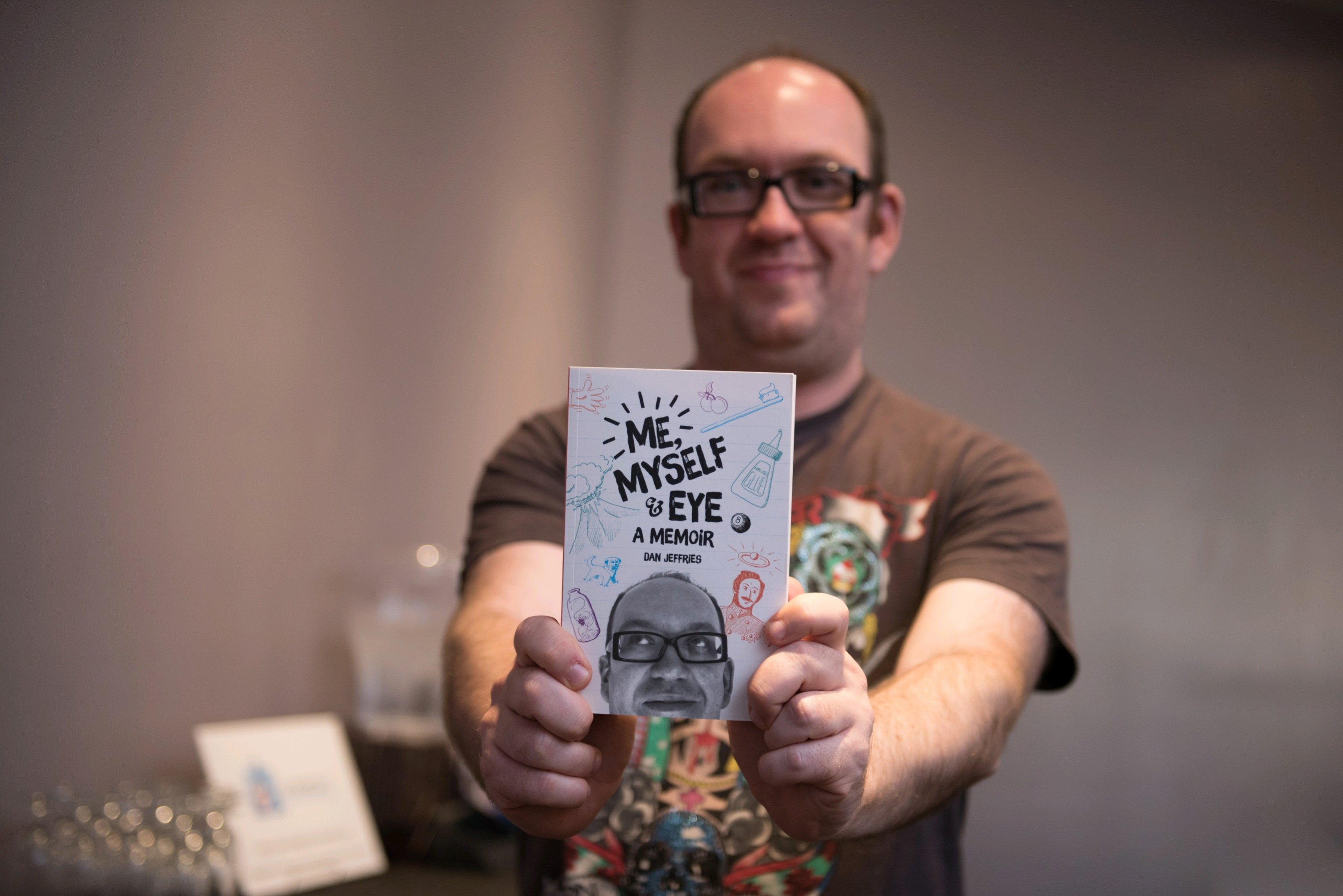 Imagine living with one of the world’s rarest medical conditions, to then discover you have another one… with the unexpected melodramas that are worthy to be in a book. As it happens, Dan Jeffries is one such phenomenon. And yes, he’s even published his own memoirs!

I first came across Dan after he gave a really passionate and rather hilarious presentation at the Cambridge Rare Disease Network (CRDN) Summit last year. It struck me that after everything he’s gone through, he still has an ability to see the lighter side of what were otherwise serious scenarios.

In the build-up to Rare Disease Day (see Rare Disease Day 2018 – Join in and #ShowYourRare), the team and I wanted to show our solidarity with our rare disease comrades by sharing a snapshot of Dan’s unbelievable story.

‘It’s fascinating to be that rare’

At 4-years-old, Dan was diagnosed with a non-hereditary vascular condition called Wyburn-Mason syndrome. He explained this to me as, “…a mass of enlarged blood vessels around my mid-brain.” The consequence is that he’s completely blind in his left eye. His journey to diagnosis and subsequent tribulations are quite extraordinary.

It began with his Dad, partially sighted himself, taking Dan to the opticians as a precaution. Upon observing his eye, the optician exclaimed, “Blimey, what’s this?” He was referred to Bristol Eye Hospital and told it was an arteriovenous malformation, also known as a (take a deep breath) retinoencephalofacial angiomatosis.

As Dan told me, “It’s super rare!” Supposedly, there’s only been 30 reported cases in the last 50 years worldwide, or by Dan’s calculations, “It might only affect around 1 in 70 million people.” Through Facebook, he’s so far managed to find up to six people with the condition but only outside of Europe.

‘I used to have queues of specialists waiting to see me’

Dan’s case is so unique that when he was 30, the specialist at the eye hospital asked him to volunteer to be ‘diagnosed’ by University students for their final exams. Rather than notice his eye, the first student commented on his, ‘…very large hands, protruding jaw and exposed forehead.’ Subsequent students happened to react in a similar way.

“‘Look, they’re all talking about big hands, large head…I’ve not heard this before!”

The specialist replied, ‘Well, you should go and see a doctor, you might have something called Acromegaly.’”

In the first instance, Dan turned to Google, even though he feels self-diagnosis isn’t necessarily a good thing but, “It’s kind of different when you’re given a specific name for something.” Reading the symptoms, Dan just knew that’s what he had;

“Fatigue, change in facial appearance, loss of libido, gaps in teeth and various other things.”

Acromegaly is caused by a benign (non-cancerous) tumour of the pituitary gland, which causes an excessive release of growth hormone. The hardest part for Dan was to phone his parents and say, “I think I’ve got a brain tumour.” Even his local doctor had to find out how to test for it because, as Dan suggests, “It’s so rare that GPs don’t really know.” His growth hormone and another hormone-type, the insulin-like growth factor-1 (IGF-1) results were off the scale!

‘It was going to be challenging’

The pituitary gland is situated behind the bridge of the nose and at the base of the brain. After several potential set-backs to remove the tumour, not least the blood vessels from his Wyburn-Mason syndrome being in the way and incredibly, the discovery of a leaking heart valve, Dan underwent surgery in November 2007.

“All my family were sat around my bed. I rubbed my hands and for the first time ever they felt dry. I held them up and said, ‘FEEL MY HANDS!’ It was such a revelation for me that I knew the tumour had gone…”

‘We didn’t want to panic ourselves’

The surgeon had reached Dan’s pituitary gland through his nose. Post-operation, he started getting really bad nose bleeds and, ‘…a thin white fluid dripping out of it.’ This was spinal fluid, known as a cerebrospinal fluid leak. Having been sent home from hospital on watch, it wasn’t long before Dan was readmitted with his ‘head on fire’ and sister literally seeing his ‘head throbbing.’ Believe it or not, Dan had only gone and caught meningitis!

After more than two weeks of recovery, including a stint in intensive care, the use of a lumbar drain to release the excessive spinal fluid as well as another operation to seal the hole at the back of his nose, Dan’s transformation was well under way;

“My face started to change, my hands and feet went back to normal. I’d wake up and my bed was soaked through to the mattress where all this excess fluid in my body was draining out. It was amazing…”

With hindsight, it was obvious for Dan that something wasn’t right two years prior to his diagnosis of Acromegaly. He put it to me, “People didn’t recognise me anymore because I looked different.” The fact that he had two molar teeth removed because he couldn’t bite down properly should’ve set off alarm bells. “This is what annoys me,” he said, “Departments don’t talk to each other.”

Dan also had to get a ring cut off his finger as his hands grew;

“I just couldn’t take it off but you don’t think, ‘I must have a brain tumour!’ Life doesn’t work like that.”

Dan told me that it was such a massive relief to eventually be given a diagnosis;

“I always use this line that when the tumour was removed, it was like a plug being lifted from my soul.”

When Dan turned 36, someone suggested he should write a book about his journey. Through a kick-starter campaign, he managed to raise £3500 to publish his own memoir, Me, Myself & Eye. Over the following year, Dan was giving interviews to the media and doing book events and signings. It was by this point, The Pituitary Foundation asked him to become a Volunteer Ambassador. He has since gone on to organise the first UK Acromegaly get together, with over 40 people attending. It will be returning again this summer at the Queen Elizabeth Hospital Birmingham.

“The most useful thing that specialists and groups want to hear is… the human story. That’s what they want to learn from. All these things I endeavour to do, it’s just to try to make a difference.”

Dan hasn’t let his experiences stop him living the life he wants, using his creative flare to write music and DJ. Most people, as he suggests, ‘…don’t think there’s anything wrong because my conditions are hidden’ and he certainly doesn’t want to be defined by them, either. Yet, after all is said and done, Dan wouldn’t have it any other way;

“If I didn’t have these two rare conditions, I may not have done half of the things I have by now. I see it as a completely mixed blessing… you’ve just got to go with it!”

On behalf of On The Pulse, I would really like to thank Dan for making this happen and encapsulating what the rare disease community is all about. Dan’s insightful and hilarious memoir, ‘Me, Myself & Eye’ is available to purchase on Amazon and Audible. Keep up to date with Dan’s journey on Facebook and Twitter.

If you have any questions or comments for Dan or ourselves, you can also get in touch with us through Facebook, Twitter or by email at [email protected].

On The Pulse is the trading name of On The Pulse Consultancy Ltd. Registered in England No. 10837491
← Previous Post Next Post →
We use cookies on our website to give you the most relevant experience by remembering your preferences and repeat visits. By clicking “Accept”, you consent to the use of ALL the cookies.
Cookie settingsACCEPT
Manage consent