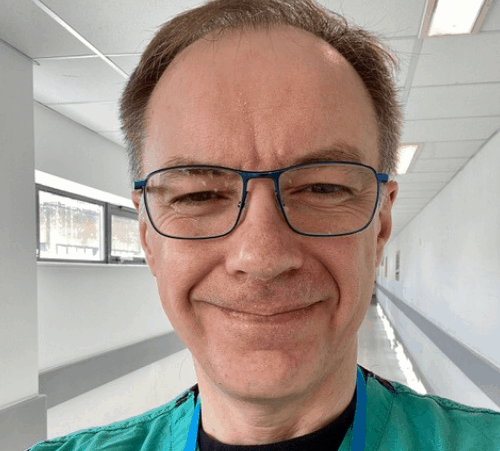 Stefan Marciniak is Professor of Respiratory Science at the University of Cambridge where his lab studies the role of abnormal protein folding in lung disease. He is an honorary consultant respiratory physician at Addenbrooke’s and Papworth Hospitals with a clinical focus on pleural medicine including familial pneumothorax.

Stefan’s talk
Smokers can develop breathlessness through the loss of lung tissue, otherwise called pulmonary emphysema. In this talk we will explore why some individuals develop this at a much younger age, diving deep into the SERPINA1 gene. When the SERPINA1 gene is defective, it can also have other surprising effects even in non-smokers. Together, let’s look at some sophisticated microscopic techniques to reveal features of the SERPINA1 gene, and what it codes for.

Who is your hero?
Marie Curie who was the first woman to win a Nobel Prize and remains one of the few people ever to have won Nobel Prizes in two different disciplines.

Where is your favourite place in the world?
France because of her cheese, wine and language.

What is your greatest achievement?
Learning to speak French (rather badly I’m afraid).

What is your wish for the future of rare disease?
For the development of a simple treatment that simultaneously protects both the lung of liver in affected individuals.