Made with Hope, Butter, and Love: Cookie Decorating for Cures 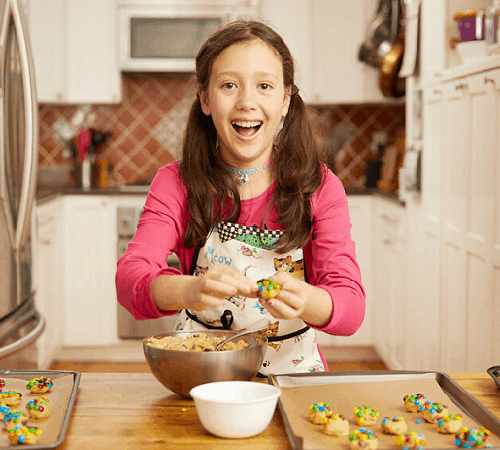 Dana is a US based 10 years old, a fifth grader, and the founder of Cookies4Cures, a nonprofit that raises money for research into rare pediatric diseases. Dana founded Cookies4Cures on her 7th birthday when she started raising money for her friend, Mila, who has a rare and fatal genetic disorder called Batten. She baked cookies and sold them out of a red wagon with a sign that said “Cookies4Mila.”

Her first goal was $1000 and it took three months of weekly wagon sales to get there. Inspired to do more, she started a GoFundMe site, recruited more kids, and continued holding ever bigger bake sales. Three months later, at the end of the year, she and her friends had raised $56,000. More importantly, they helped fund research that led to the first ever cure for Mila’s form of Batten. The doctors called it Milasen, and it was life-changing.

Once Mila got her treatment, Dana had to decide what to do next. Another friend, Ollie, had been recently diagnosed with PANS (pediatric acute-onset neuropsychiatric syndrome). Her team of kids started baking and Cookies4PANS was born. One year later, they had raised $30,000 and helped the Stanford PANS Clinic hire a new researcher, Dr. Rahmen. The kids now help fund Dr. Rahmen’s research.

In September of 2019, Dana was honored as the Rising Star Champion of Hope by the Global Genes organization. Her acceptance speech brought 1000 people to their feet and inspired a new wave of people to get involved with Cookies4Cures. Recently, she was honored as a 2020 winner of the Gloria Barron Prize for Young Heroes.

What began as a little girl selling cookies out of a red wagon has blossomed into an organization with over 100 members who have baked almost 20,000 cookies and raised over $100,000. Dana started with Cookies4Mila and then Cookies4PANS. This year, she has launched Cookies4SMA for Spinal Muscular Atrophy and Cookies4Sophie for an ultra-rare disease called MCTO. Several more Cookies4Cures fundraisers are already in the wings.

As Dana says, “When a child has a rare disease with no cure, research is hope.” Cookies4Cures is funding hope, one cookie at a time.

Dana’s session at RAREfest20
Join Dana live in TRACK 2 at RAREfest20 where she’ll be giving us a cookie buttercream icing decorating lesson and teling us a bit more about her fundraising work.