Heartwarming, uplifting and informative, RAREfest18, the world’s first-ever festival on rare diseases drew huge crowds to the Guildhall over the weekend of November 30 & December 1.

RAREfest18 was the first of its kind; a rare disease inspired festival, created and delivered by Cambridge Rare Disease Network, bringing passionate and inspirational people together to change the rare disease landscape for the better.

The event set out to raise awareness, share information and dispel some of the myths about rare diseases and the plight of those living with them. Rare diseases affect around 3.5 million people in the UK. Despite this, rare diseases are not consistently diagnosed, treated or supported, effectively and knowledge amongst health care professionals, educators, social care and the public is limited. The need for a powerful emotive programme was identified; speakers, exhibitors and performers at RAREfest had one goal in mind: change the rare disease landscape. Annual summits and events by CRDN have consistently been milestone events in the rare disease community but bringing a rare disease event to an already invested community has a certain security. This time we wanted to tackle the more challenging issue of public perception of rare disease.

RAREfest was to be our most ambitious event to date!

This year’s unique RAREfest event was created for the public, in part due to the disparity between actual facts and public awareness of rare diseases. For example, while research has shown that only 38% of people think rare diseases have no treatment, in reality this figure is 95%. The aim of the festival was to bring about meaningful and positive change in as many ways as possible for the rare disease community – from raising broader awareness and promoting understanding, to providing practical support. Over two free days, RAREfest provided a stimulating mix of science, technology and the arts, with motivational speakers from academia, industry, the media and all importantly, patient advocates.

The educational programme was enriched with interactive exhibits, demos and film, all public-facing, promoting inclusivity to widely raise the profile of rare disease. CRDN created a platform from which the rare disease community itself was in charge of their own narrative with which to educate and engage a public audience.  Read the glittering review from Cambridge independent newspaper here https://www.cambridgeindependent.co.uk/news/rarefest-brings-life-sciences-to-guildhall-9056317/

On the evening of 30th November 2018 over 200 attendees listened attentively as Alastair Kent, OBE, former Chairman of CRDN, opened the world’s first rare disease festival with a poignant observation:

“A few years ago, it would not have been possible to have filled a hall like this (Cambridge Guildhall)”

Attendees were subtly educated whilst being entertained during AbbiBrown’s presentation, Growing up with a Galapagos Tortoise: and other funny stories. Abbi, a founding member of CRDN who, by her own admission left Cambridge University with two degrees and wheelchair, explained what life had been like for her growing up with osteogenesis imperfecta (Brittle Bones) relaying stories of her time as cox for her college rowing team.

We are bombarded every day by media images of how we should look, for people with disfigurement it can be absolutely paralysing

The audience were captivated by an enchanting dance performance from Unique Feet, CRDN’s local community group of 10 children, each with a different rare disease, and the talented classical musician James Risdon who gave a mesmerising recorder performance. James lives with a rare eye disease, Leber’s Congenital Amaurosis, and learns all his repertoire through braille.

The evening ended with an awe-inspiring talk by Michael McGrath who led polar expeditions to both North and South poles to raise awareness of Muscular Dystrophy, a degenerative disease which has led to Michael himself being the proud owner of a technical masterpiece of a power chair to enable him to take on such challenges and be as independent as possible. Michael’s work through The Muscle Help Foundation ensures children affected by muscular dystrophy can experience life changing adventures of their own.

The evening was a resounding success, bringing together a diverse public audience mixed with rare disease advocates to walk in the shoes of those living with rare conditions through humour, dance, music and inspiring presentations. Read the Cambridge Independent news coverage of the event here. 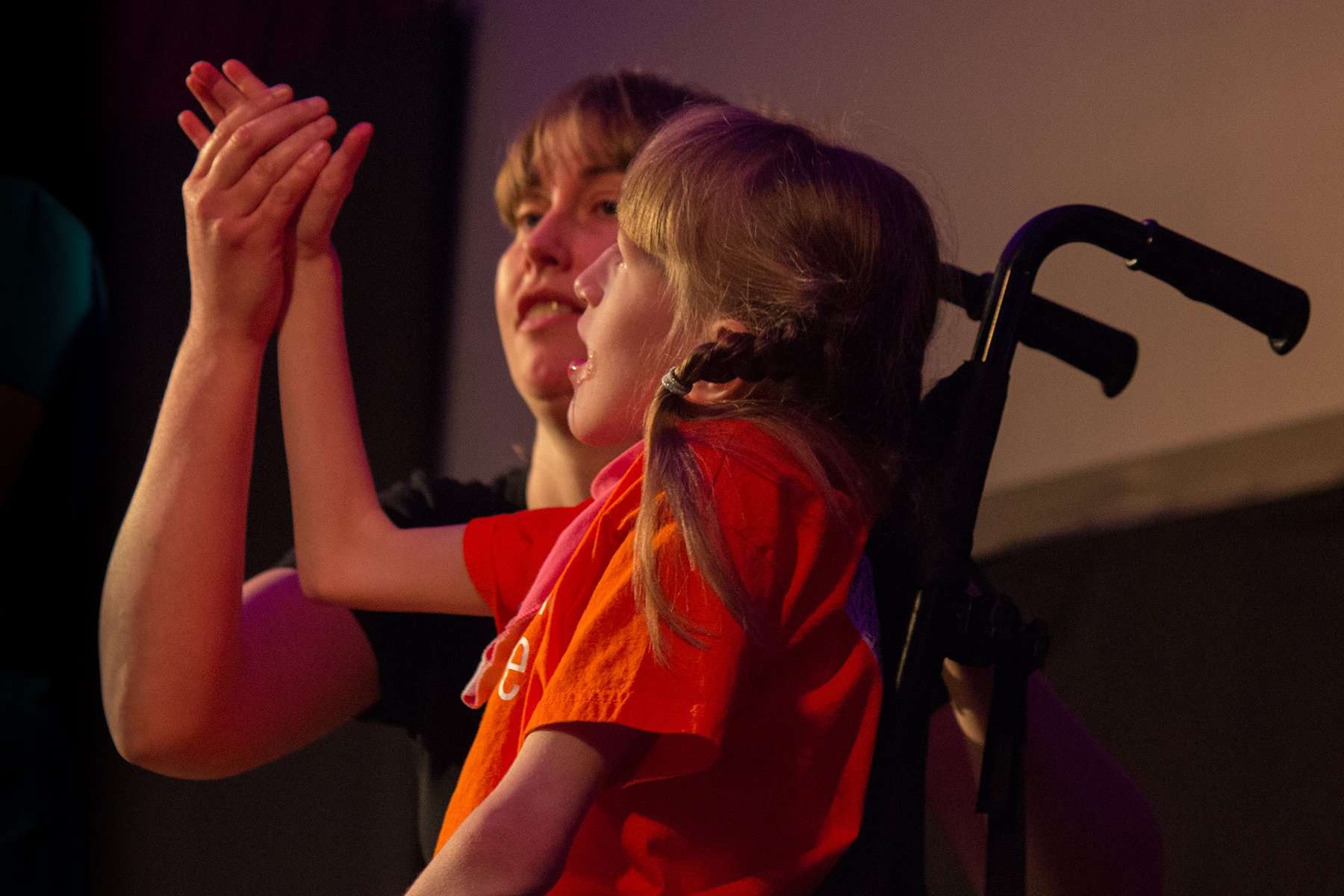 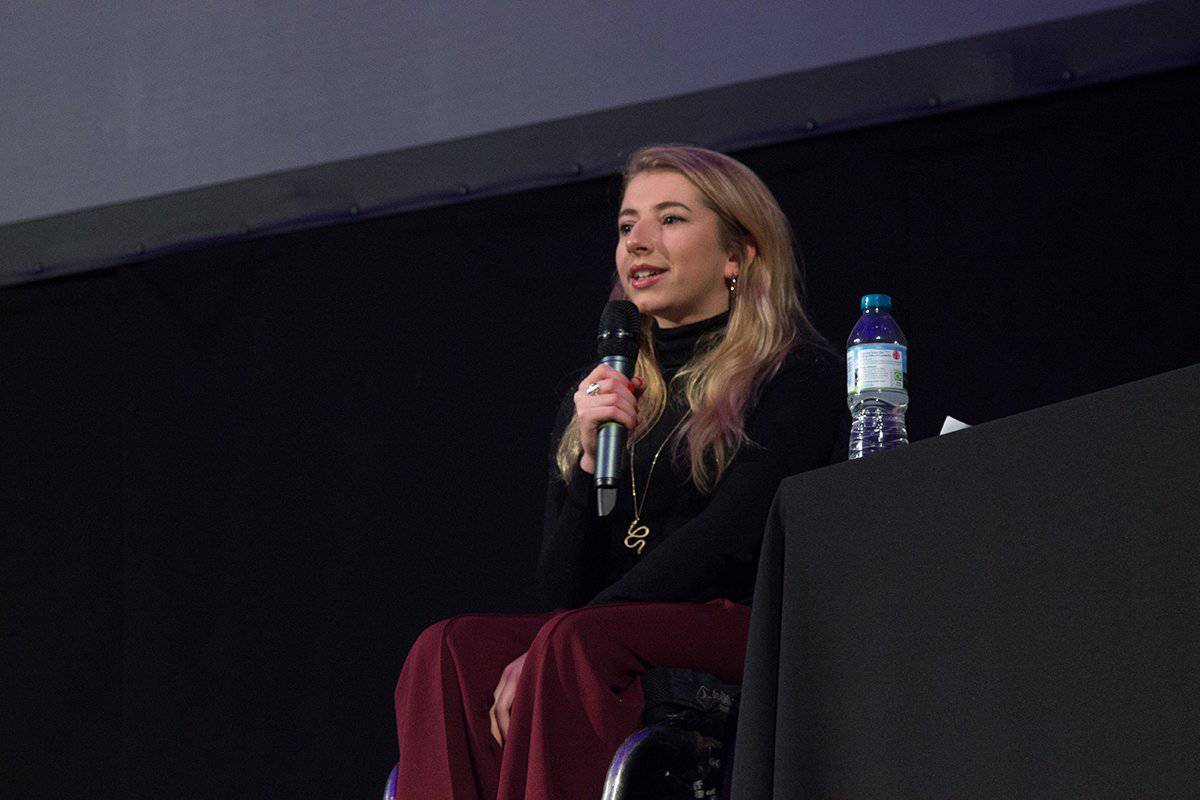 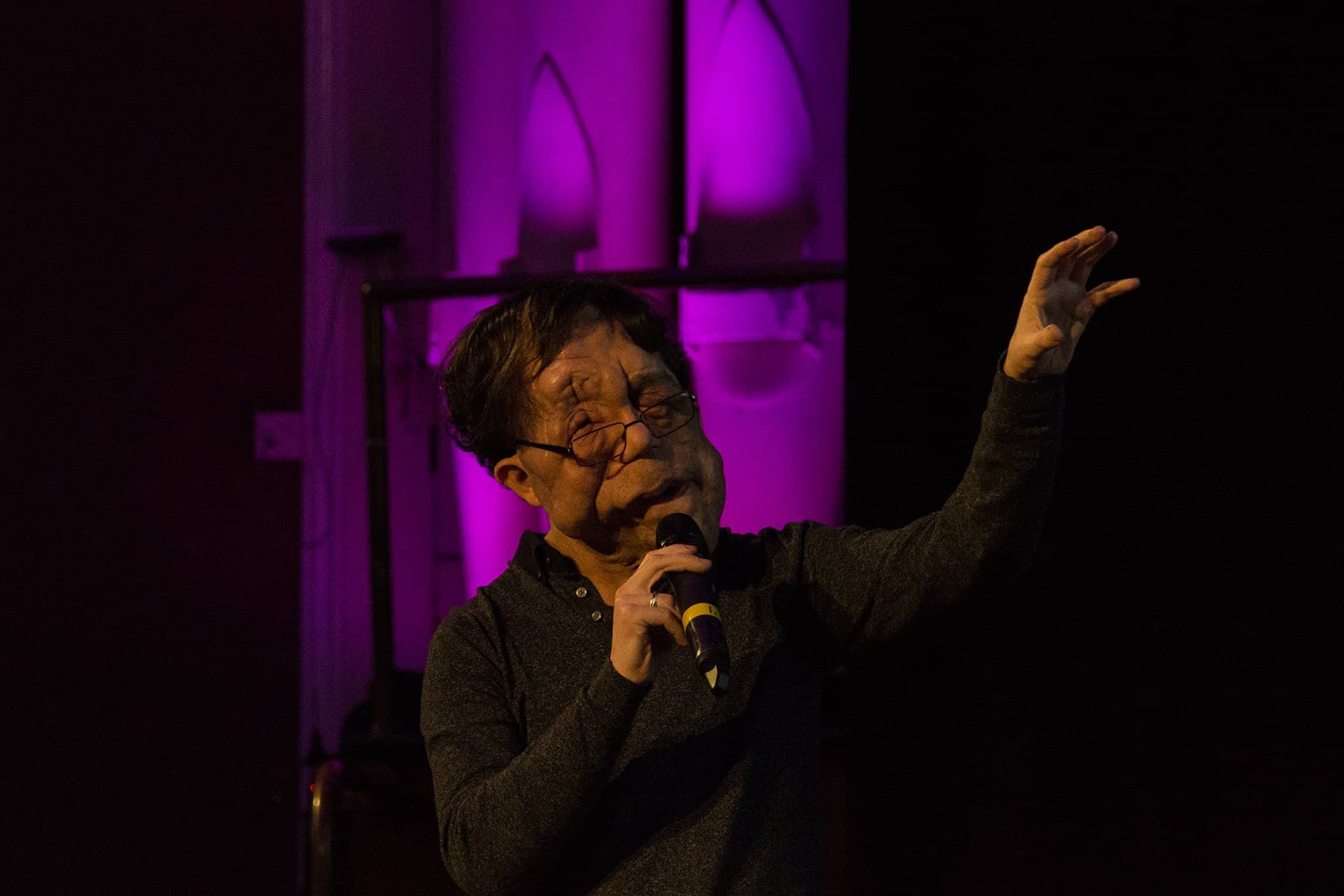 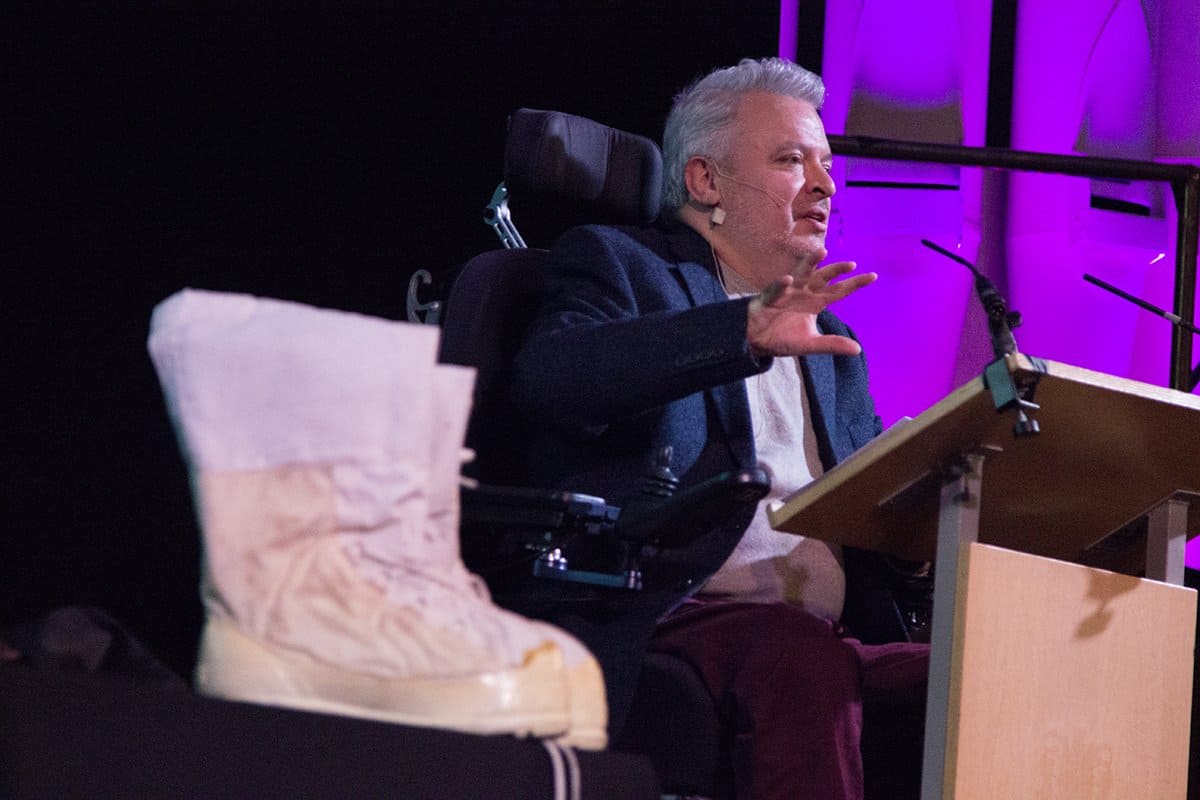 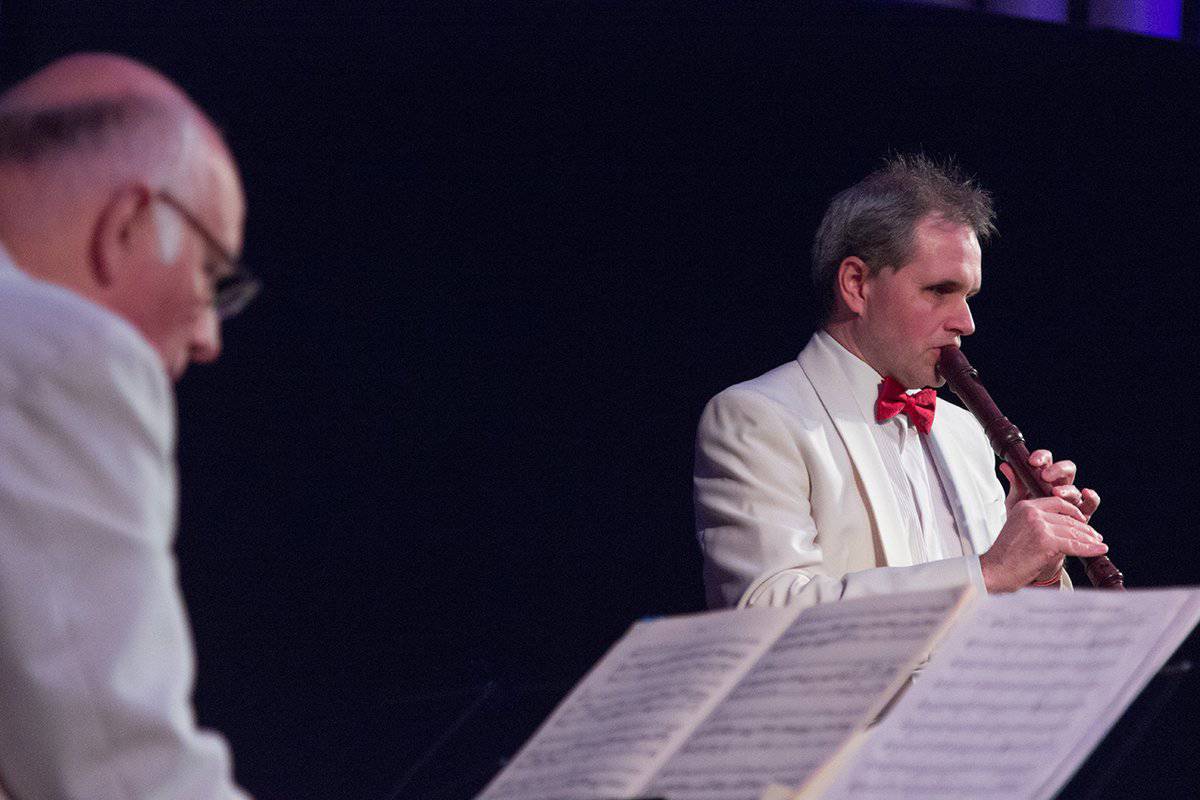 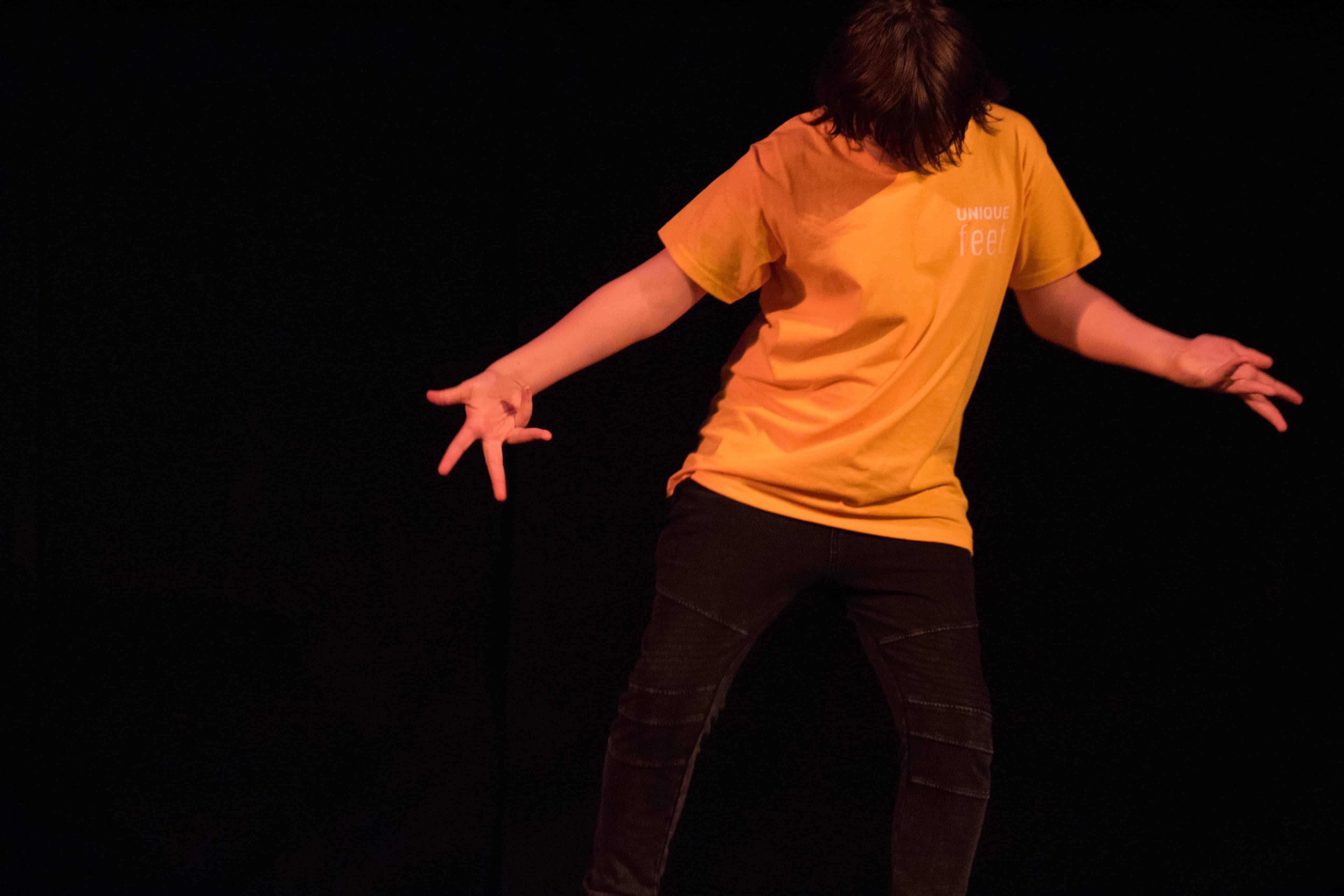 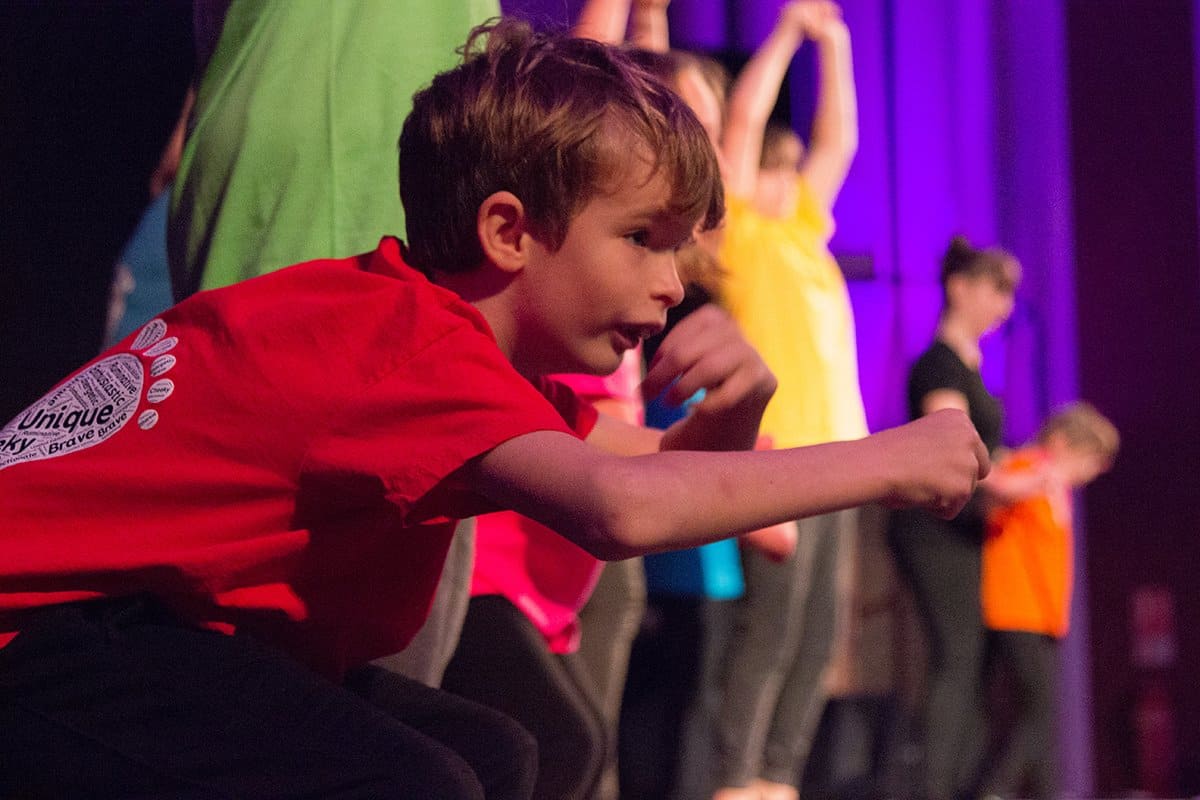 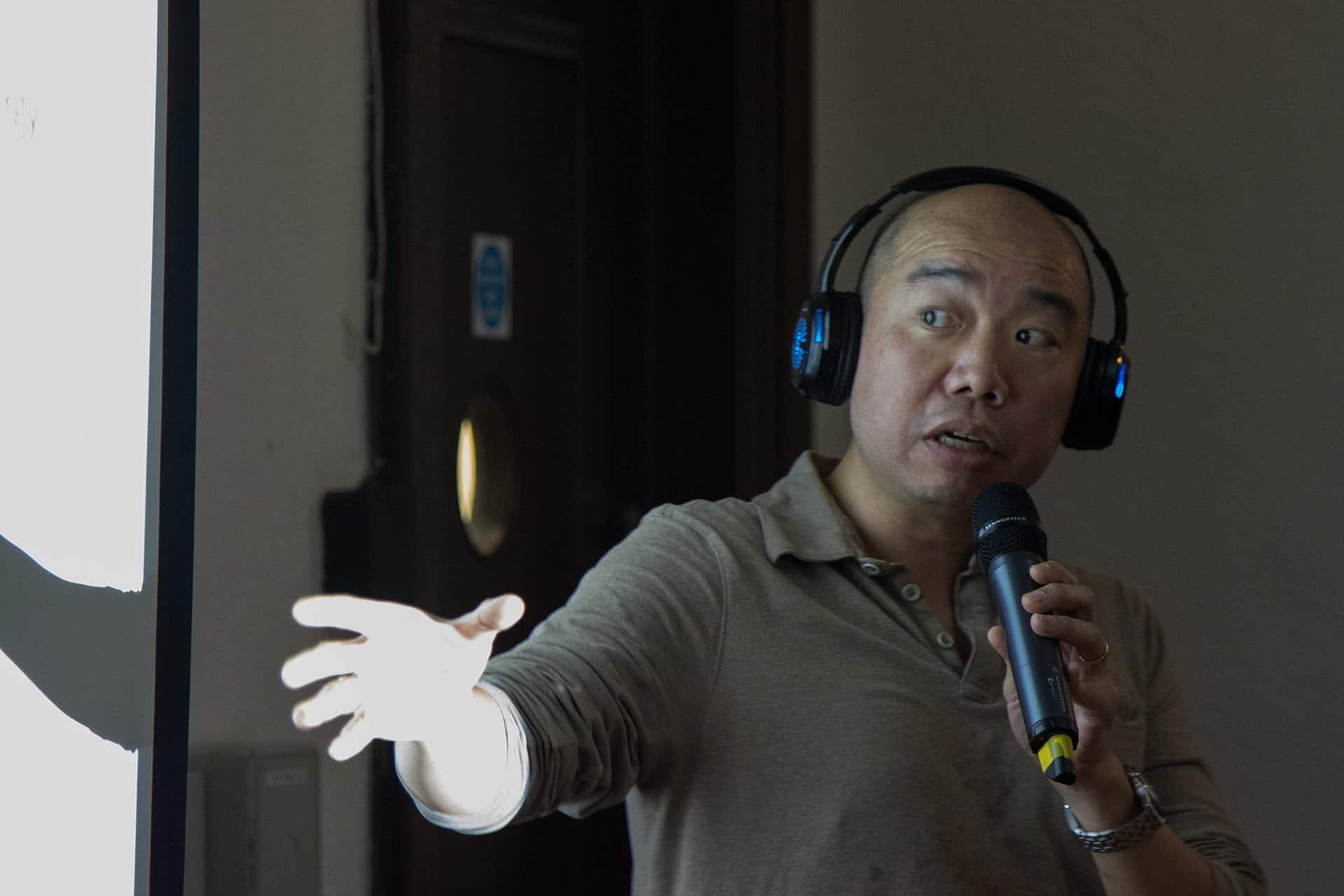 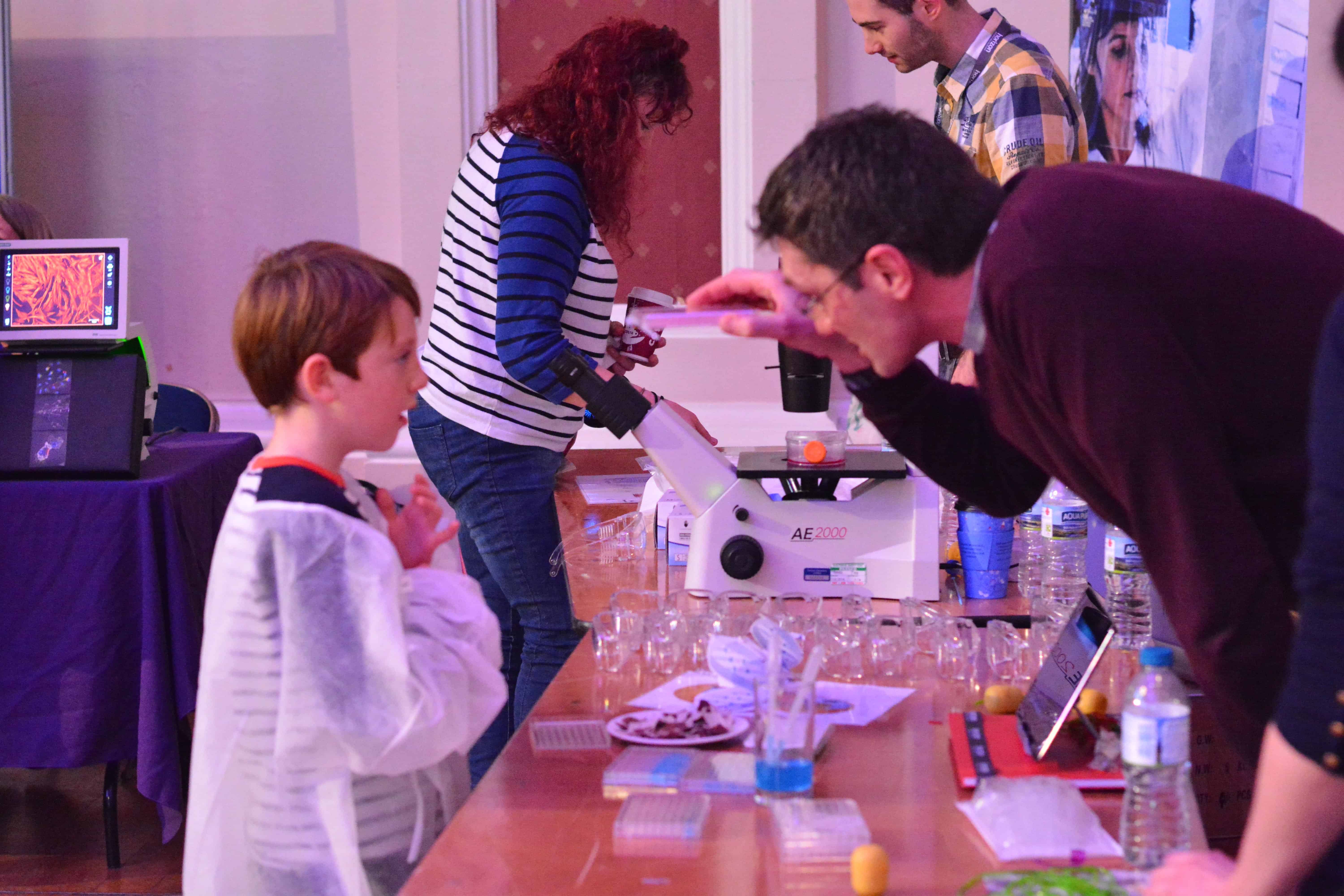 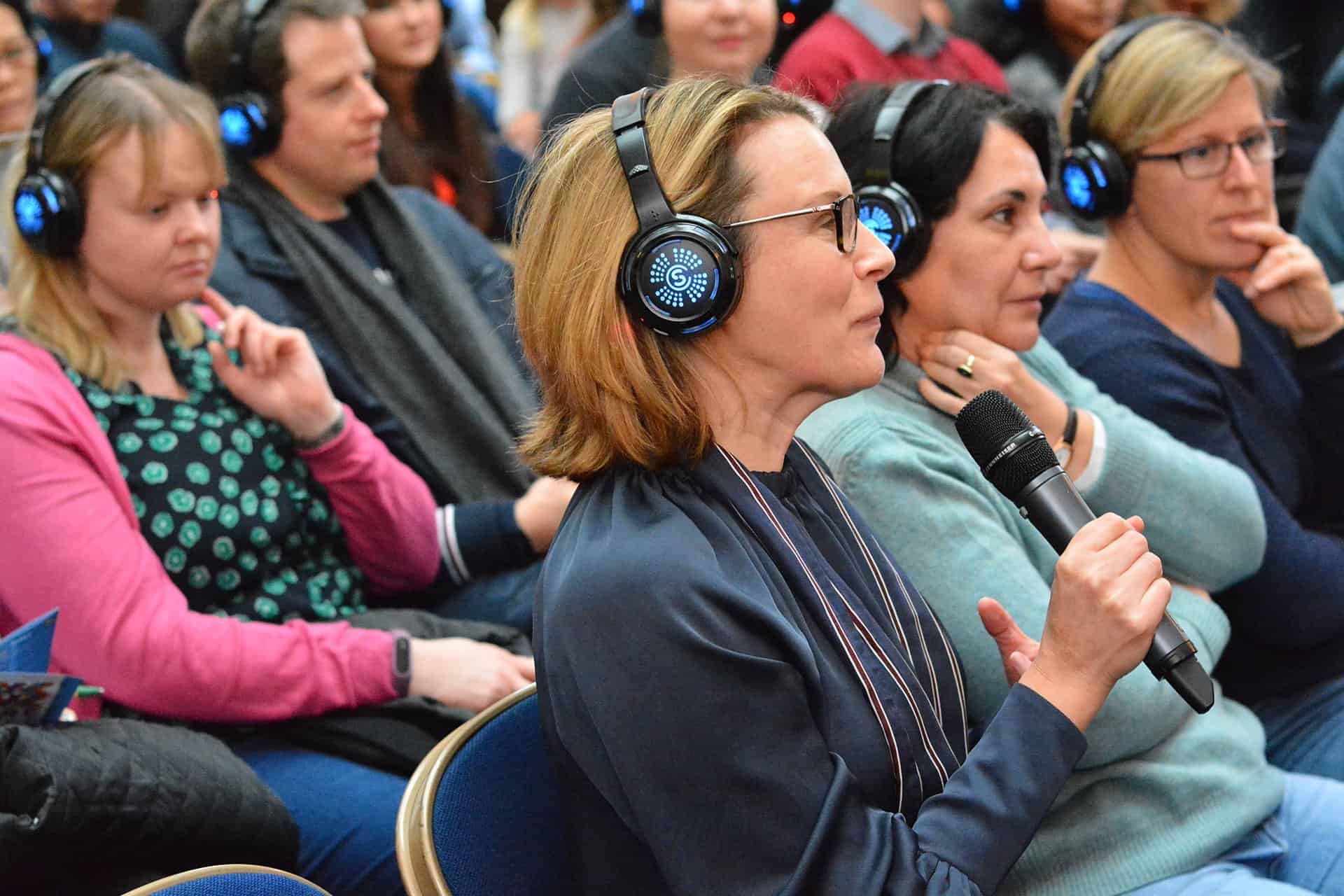 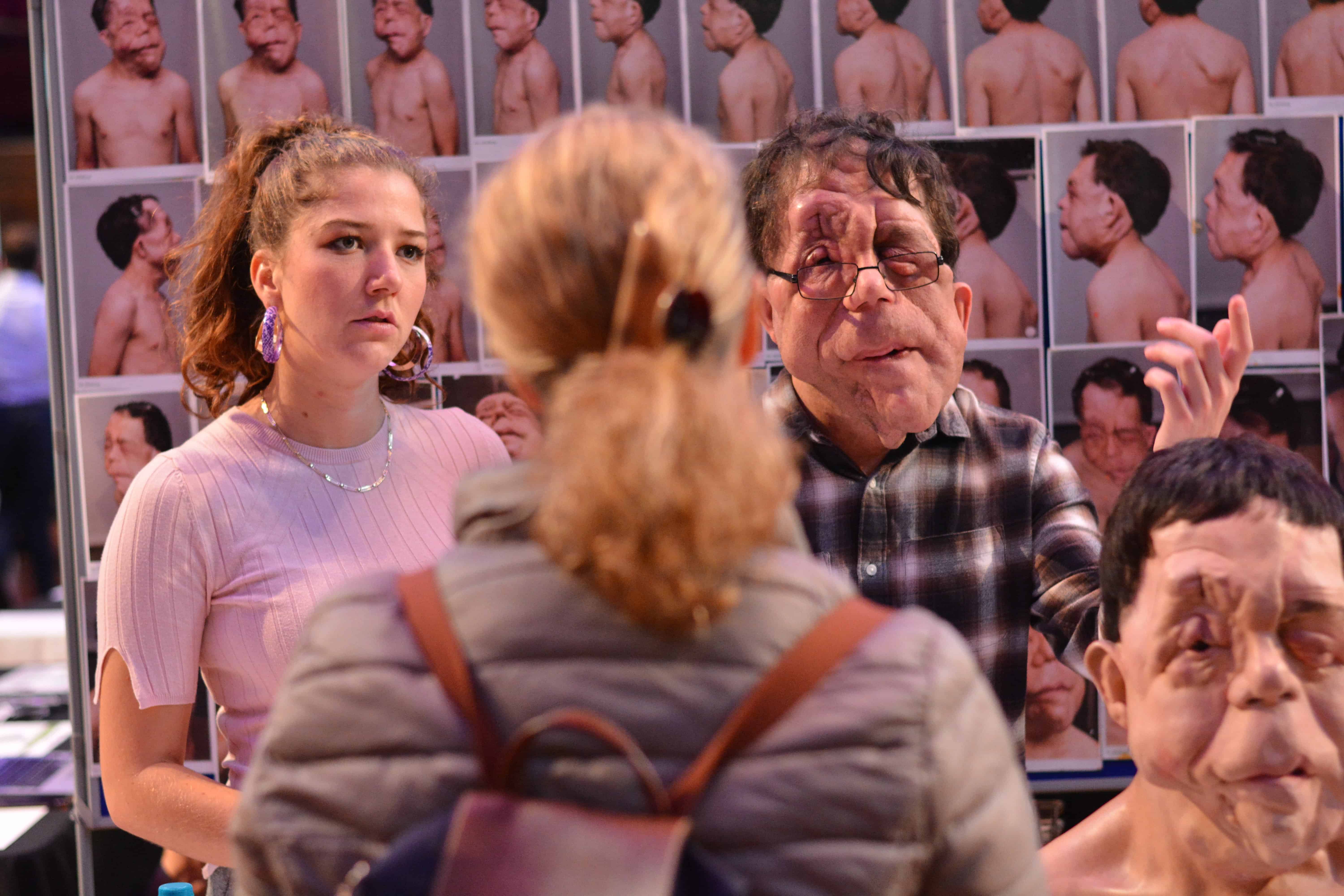 Saturday saw around 800 curious people weaving their way through the Guildhall to engage with all that RAREfest had to offer. Families with small children, teenagers who’d taken part in the CRDN RAREsolutions design competition, local students, health professionals and business representatives alongside a tribe of rare disease patients and advocates from across the UK.

Nine incredible speakers enthralled audiences. Dan Jeffries told the colourful story of life with not one, but two rare diseases, Acromegaly and Wyburn-Mason Syndrome. Rebecca Pender shared a heart-breaking account of her struggle to persuade medical professionals believe her accounts of her daughter’s illness, a rare chromosome deletion and duplication syndrome called 8p. The Cambridge Independent captured the power of Rebecca’s story here. Dr Crystal Ruff, a scientist from Illumina delivered a fascinating talk on changing the future with stem cells, a TED talk she has had thousands of hits on, Prof Anna Middleton from the Wellcome Genome Campus tackled the ethical considerations of ownership of DNA data playing on the topical story of the announcement only 2 days before of the Chinese scientist who had gene-edited twins. Read more about her talk in this newspaper article here.

Film Festival
Over 25 charities and research organisations entered our very first film festival gathering over 3500 upvotes between them and the highest scoring fourteen being shown on a big screen over the Saturday.

Exhibitors
Twenty-two interactive exhibits took over the Guildhall bringing rare disease inspired cool technology, arts and science to the public. With demos of robots and technology, fun science experiments, sculpture exhibits and rare disease charities showcasing some of the amazing work they do, the diverse audience was treated to a packed day of hands on activities to help educate and inspire.

Networking
There were many opportunities throughout both events to network with peers. The post RAREfest VIP reception drew together eighty leaders from science, healthcare, technology, business, charity and philanthropy to network with exhibitors, speakers and the CRDN team. Dame Mary Archer, a fierce advocate for a Cambridge Children’s Hospital, Julian Rayner, Director of the Wellcome Genome Campus and Daniel Zeichner our Cambridge MP attended, to name a few.

So how did we do?
After the dust has settled and we are now and truly well into the count down for RAREsummit we wanted to look back and digest the impact of our very first public facing event.

Here are some stats from RAREfest 2018

The event was absolutely fantastic. It was obvious how much hard work had gone into it and gaining the balance between industry and public interest must have been a tough navigation, which was pulled off unbelievably well.

Lots of people we’ve spoken to today are passers-by. They’re out doing their Christmas shopping. That’s wonderful because it means the topic is broadening out to the wider community.

Head of business development UK at No Isolation

← Adam Pearson: Actor, TV presenter and campaigner speaking and exhibiting at #RAREFest18 2019 Rare Disease Day Cambridge Lecture →
We use cookies on our website to give you the most relevant experience by remembering your preferences and repeat visits. By clicking “Accept”, you consent to the use of ALL the cookies.
Cookie settingsACCEPT
Manage consent