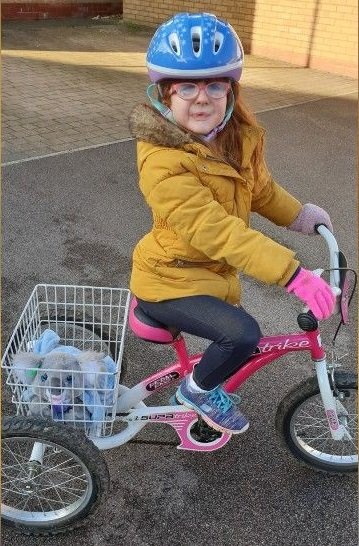 8 year old Isla is a very determined little girl who wants to be as independent as possible!

About Isla
She and her brother Dylan love their dance and swimming lessons and have a mini sausage dog called Coco. Isla is also a bit of a local celebrity, she did a 75km trike ride to raise money for Addenbrookes Hospital. And managed to raise a staggering £11k – what a superstar!

For Isla FSS also results in scoliosis (curvature of the spine) and arthrogryposis (contracture of her joints) which means that she has to undergo multiple surgical procedures on her hands, mouth and eyelids and has ongoing physiotherapies including wearing orthotic supports such as hand splints. She is currently awaiting spinal surgery and in the meantime has a new back brace to help support her spine, which she needs to build up to wearing for 23 hours a day! Isla is not going to stop this making her look fabulous and has chosen a gorgeous butterfly design!

Isla, who lives in St Neots, had been learning about Egypt at school when she heard about the Giza Pyramids Virtual Challenge, which takes participants through a 46-mile trail between Cairo and the Seven Wonders of the Ancient World.

She decided to take it on to raise money for Addenbrooke’s Hospital.

Isla and her family are members of CRDN’s Unique Feet group supporting children with rare diseases and their families.