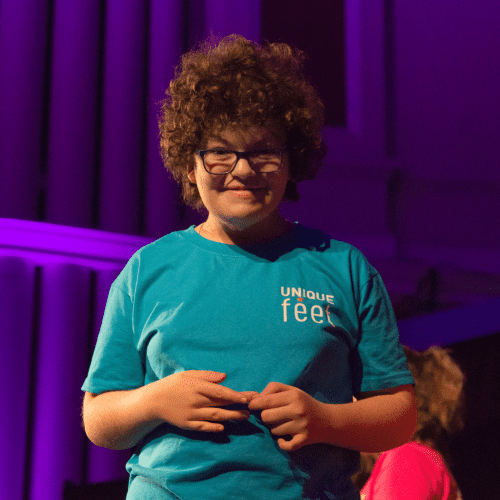 This is Charlotte. A smiley, cheeky 15 year old who has a rare genetic condition called Coffin Siris Syndrome, which affects around 200 people worldwide as known so far.

Coffin Siris Syndrome can be caused by a change in a number of different genes. For Charlotte, it’s due to a deletion in her ARID1B gene, which has resulted in a genesis of her corpus colosseum (missing nerve connections between the two hemispheres of her brain) and associated global developmental delay.

Charlotte has low muscle tone which made learning to sit up and walk more of a challenge for her, and as a young child she used orthotics to help. Charlotte also had some feeding issues when she was young and had a basal gastric tube for 6 months. She had therapy support (OT / PT / SLT) until secondary school.

Charlotte loves people! She has great friendships and has lots of empathy, although is often very shy with strangers. She understands a lot more of what’s going on than she will say, and it’s the twinkle in her eye and cheeky smile that tells you she knows!

Charlotte can read and loves choosing her own food from menus. Although it’s likely she will always need some support when she’s older, she’s constantly gaining in her independence skills.

We have been involved with the charity Corpal – Supporting those with ACC and Aicardi syndrome and families of children who also have agenesis of the corpus colosseum.

More recently we’ve been involved with Cambridge Rare Disease Network’s Unique Feet group for about 3 years, joining in with horse riding, and lots of other fun events for both her and the family. Being part of the Unique Feet community gives us a chance to share the ups and downs of family life with other families facing similar challenges, and have more friends to have fun with over the coming years.