As Rare Disease day 2020 approaches, we take a look at the biggest challenges facing orphan drug developers and ask whether the future is bright or bleak for these difficult conditions.

There could be as many as 7,000 rare diseases – defined in the EU as conditions that affect less than one in 2,000 people – but approximately 90% of them still have no effective treatments.

This is no small issue – as the common maxim goes, ‘rare diseases aren’t rare’. In Europe alone it is estimated that orphan conditions affect around 30 million patients, or around one in 17 people.

But many challenges still remain in research and market access for orphan drugs, and in fact recent analysis from GlobalData shows that the number of drugs awarded orphan drug designations (ODDs) by both the Food and Drug Administration (FDA) and the European Medicines Agency (EMA) has declined over the last six years, despite the benefits of these designations in speeding these drugs through development.

The EMA had a much greater decline in unique drugs awarded ODDs than the FDA, with a 49% decrease between 2014 and 2019, while the FDA only had an 8% decrease across the same time period.

“Orphan drugs are no longer under the radar and may be on a potential collision course with policymakers”
Quentin Hogan, GlobalData

“The FDA decline is however more surprising considering that 2017 was a bumper year for drugs awarded ODDs in the US, significantly beating previous records,” says Quentin Horgan, pharma analyst at GlobalData. “This large spike in 2017 for the US could be attributed to the FDA’s Orphan Drug Modernization Plan, which began in 2017 with the aim to clear out the backlog and streamline the ODD application process.” 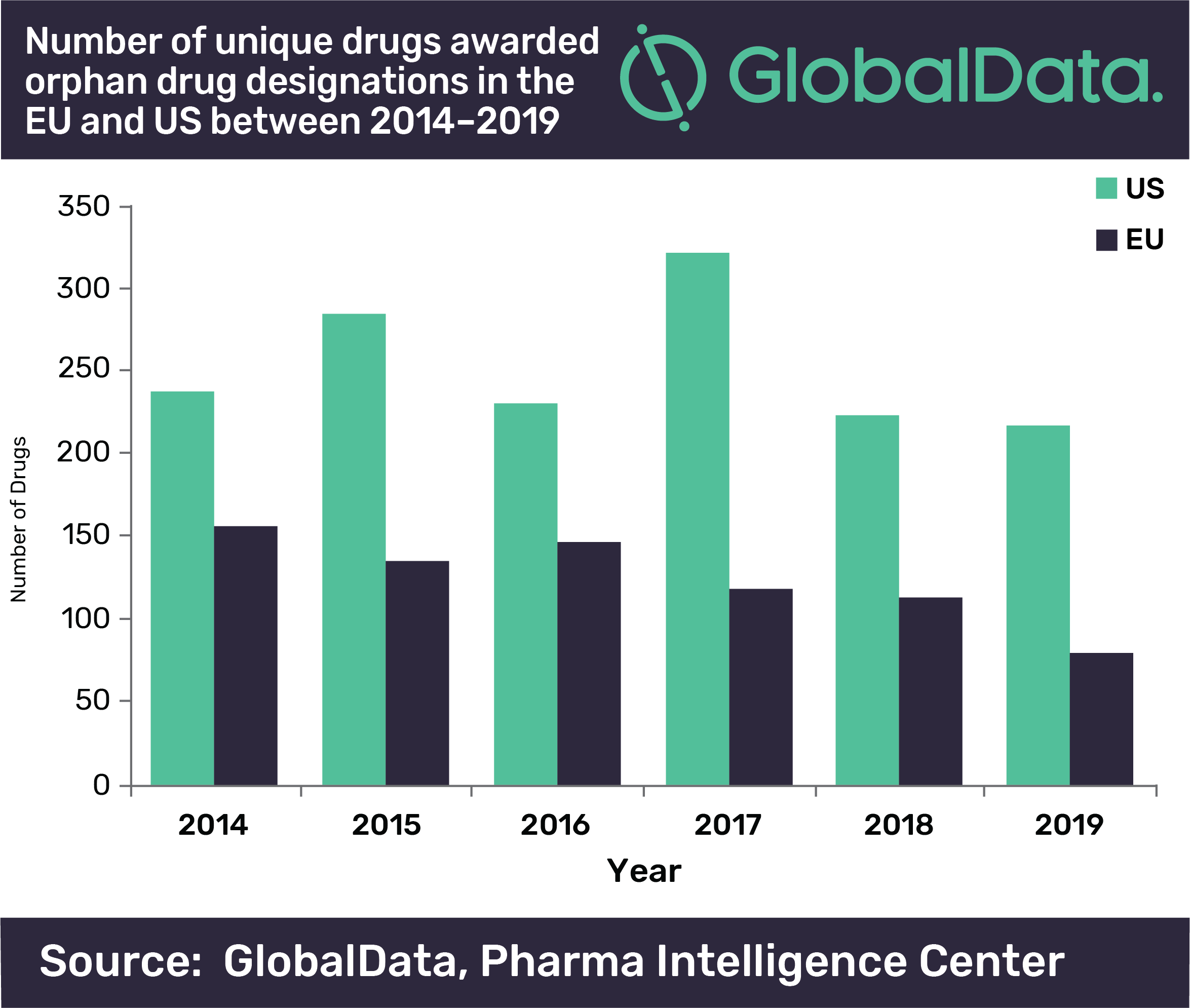 There’s no doubt that rare diseases are an incredibly difficult area for any company to work in. The challenges are manifold, covering areas as broad as economics, research and disease awareness.

“There is an inherent economical challenge with rare diseases,” Dr Ron Jortner tells pharmaphorum. “As the market is, by definition, a small one, a company developing a treatment may find it hard to cover their costs, unless they charge a very high price for the drug, which in itself puts a huge burden on patients and insurers, and renders the treatment practically unavailable for many who need it.”

Jortner is a trustee of the Cambridge Rare Disease Network, a charity that aims to bring together stakeholders to aid treatment and care of orphan conditions. Jortner heads up the charity’s Companies Forum, which focuses on collaborations between industry stakeholders.

“The economical conundrum is a tough one to solve, it’s inherent and to some extent it will always haunt the field,” he says. “But there are ways to alleviate it.”

Regulatory pathways such as the EMA’s Orphan Designation are aimed at encouraging companies to take on development of drugs for rare conditions by allowing them a period of market exclusivity.

“Almost a third of all pipeline drugs are indicated for rare diseases”
“This type of solution alleviates the conundrum by making the outcome potentially more lucrative for the company,” says Jortner.

Another family of solutions aims to make drug development for rare diseases faster and cheaper – for example by offering some regulatory breaks.

“Regulators realise that for rare diseases, the risk-benefit balance should be different, because people have no existing treatment options,” says Jortner. “For example, an efficacy bar that would not justify approval for a common condition such as diabetes could still merit approval for a drug that addresses a rare condition with no treatment alternatives.”

Jortner says that another way to sidestep economic challenges in drug repurposing – where a molecule developed for a particular condition gets re-purposed for a rare disease – a process that is far cheaper than developing a new entity de novo.

The economic question, though, has become more pertinent in the last couple of years as political pressure on pharmaceutical pricing has intensified, especially in the US, where there is bipartisan support for new laws to lower drug prices.

“The impact of these political changes on orphan drugs is unclear,” Hogan says. “Despite the recent decline in the awarding of ODDs, the number of approved drugs with ODDs has increased as a proportion of FDA approvals over the last 20 years; orphan drugs are no longer under the radar and may be on a potential collision course with policymakers.

“This may be especially likely as the benefits of orphan drugs have recently been questioned by many, including Arthur Caplan, founding head of the Division of Medical Ethics at NYU School of Medicine in New York City, who in a 2019 JAMA article suggested that orphan drugs direct resources and focus away from more common and widespread diseases to treat illnesses with a very small patient pool.

“Yet the pharmaceutical industry has invested significantly in these drugs, drawn in by tempting ODD incentives that can extend market exclusivity and expedite approval processes of their products.”

Beyond pricing questions, Jortner adds that there are additional challenges in clinical trials.

Because patients are few and often geographically scattered – and because clinicians are unlikely to have seen a disease before and be able to diagnose it – it may be hard to recruit enough candidates for trials, and expensive to arrange the logistics of the trial. Sometimes, he notes, a separate trial site needs to be set up just for one patient.

Jortner adds that regulators often have to accept that smaller patient cohorts, which would not be accepted for a more common condition, are necessary in orphan drugs.

Regulators still favour endpoints that can be compared to placebo groups, but not only is there a lack of established endpoints because of fewer trials in each rare disease, placebo groups are often also seen as unethical in orphan conditions – particularly those that affect children.

It may therefore be more appropriate to use a patient’s natural history as a comparator – but even this is difficult when we still lack information about many rare diseases.

“There are usually no natural history studies, very little scientific literature and few clinicians who have the expertise,” says Jortner.

He adds that another major factor exacerbating this is that there is often extremely low awareness of the disease, not only in the general public but also among healthcare professionals and the health system.

“This means that there is often no reimbursement pathway in some countries, and it’s very hard to make the case of the necessity of a treatment when no one has even heard of the condition.”

Luckily, Jortner says that many of the challenges are being addressed by the empowerment of patient support groups.

“These charities, often started by a patient family member, have gained enormous momentum with the rise of social media.

“Patient support groups have records and contacts to all patients, and often manage patient registries, through which they can make clinical trials recruitment far easier for companies. Patient groups also have great knowledge about the disease, its natural history, symptoms and care options – usually better than that of clinicians.

“And finally, the patient support groups raise disease awareness, by lobbying, talking to the media, publishing and organising events, facilitating the companies’ route to recognition and reimbursement. We are great believers in the power of patient support groups to help the industry overcome the above challenges – and by this, help make treatments possible for their own conditions.”

Despite the myriad challenges, GlobalData’s analysis shows that almost a third of all pipeline drugs are indicated for rare diseases – suggesting that despite orphan drug designations themselves being on the decline, pharma’s enthusiasm for rare diseases has not waned.

The Cambridge Rare Disease Network believes that collaborative effort and stakeholder interaction are key for changing lives in rare diseases – with the Companies Forum focused on bringing industry players together to help ensure success in orphan drug R&D across the board.

“We bring together the main companies in the space, facilitate their interaction with patient groups, regulators and clinicians, and raise awareness of key issues and topics,” Jortner explains.

For example, because of the lack of awareness of some rare diseases, a company may have an asset in their portfolio that can address an orphan condition but might not have even heard of that disease. Another company or a patient group making them aware of it could lead to a new treatment.

Jortner notes an example of an interaction between a patient group and a company leading to an advance in drug development, with a drug now in Phase 2 to treat the fibrosis element of Alström Syndrome as a result of such interaction.

GlobalData’s analysis ultimately says that orphan drugs face an “uphill battle” in 2020 and beyond, but as gloomy as that sounds it’s hard not to remain optimistic – as it’s an uphill battle that the industry seems committed to fighting.